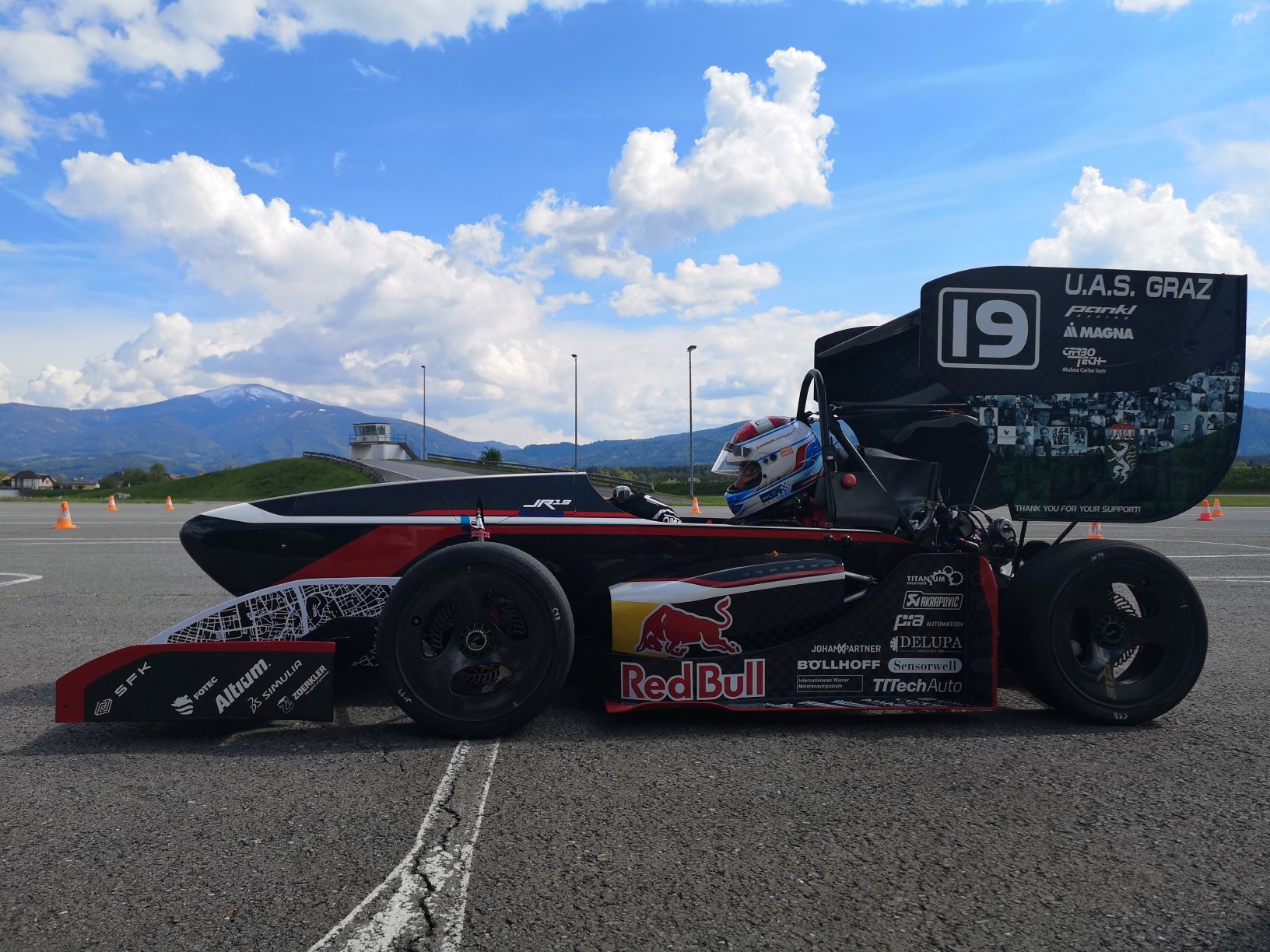 Shakedown and first weeks of testing with the jr19

Barely three weeks have passed since the first shakedown of jr19. It’s been twelve days of testing and we gained already some knowledge. We go three times a week to the test track to get the absolute maximum out of our car. The first impression is extremely positive.

Six o’clock in the morning: The first rays of sunshine fight their way through the dense clouds, when numerous Weasels are already buzzing around in the workshop. In a few minutes we’re off to the test track again, this time with three of our newest cars, so that the driver training can take place on the side. Testing phase means for joanneum racing graz a lot of work at full speed, as several cars needs to be maintained at the same time – and the jr19 need to be constantly improved.

The focus of our first test days was to eliminate minor weaknesses. The problems reduced from day to day and the jr19 became continuously better and faster. Only three weeks after the shakedown, the newest bolide almost reaches the level of jr18 – and still has a lot of air left for the top.

One reason for this success was the good preparation of our individual departments for the test season 2019. While the bolide was being completed, they also worked simultaneously on the testing process. Together with the intensive analysis of the results from jr18 – which can also be applied to jr19 – the foundation for a successful test season was already laid even before the tyres rotated for the first time.

There are still two months to go until the first competition, FS East in Hungary, but there is no time to rest for joanneum racing graz. Many parts of the race car have not even been cut, the head of the testing department Stefan Zink even says: “There is not too much time for testing.”

All in all Stefan, who will also be active as a driver in the competitions, is very satisfied with this year’s car. The jr19 is still being optimized, only recently our bolide was supplemented by the tire temperature sensors.

While most people think it‘s a supergau to test in motorsport under rainy circumstances – the rainy days in May have been a stroke of luck for joanneum racing graz. Because it is important to practice in the rain to be prepared for all eventualities in the competitions. So the drivers were able to try a lot of things on difficult ground conditions to be not surprised by any weather conditions.

A pool of nine drivers is currently in use. Only six can be named in the competitions. That’s why the internal driver selection will take place in the next few days, so that in future the drivers can be determined for the individual events and trained in a targeted manner.

About 400 test kilometers have been driven so far, 148 of them with the jr19. And there will be more to come, because the test calendar is filled to bursting. The goal is to have as many test days as possible before the competitions, so that jr19 can keep up with the best in the world.The typical test day ends at eight o’clock in the evening with returning to the workshop. In the best case, the cars are on the move for nine hours a day. As soon as the testing team has arrived at the workshop, the preparations for the next day of testing begin – there is no rest at joanneum racing graz.