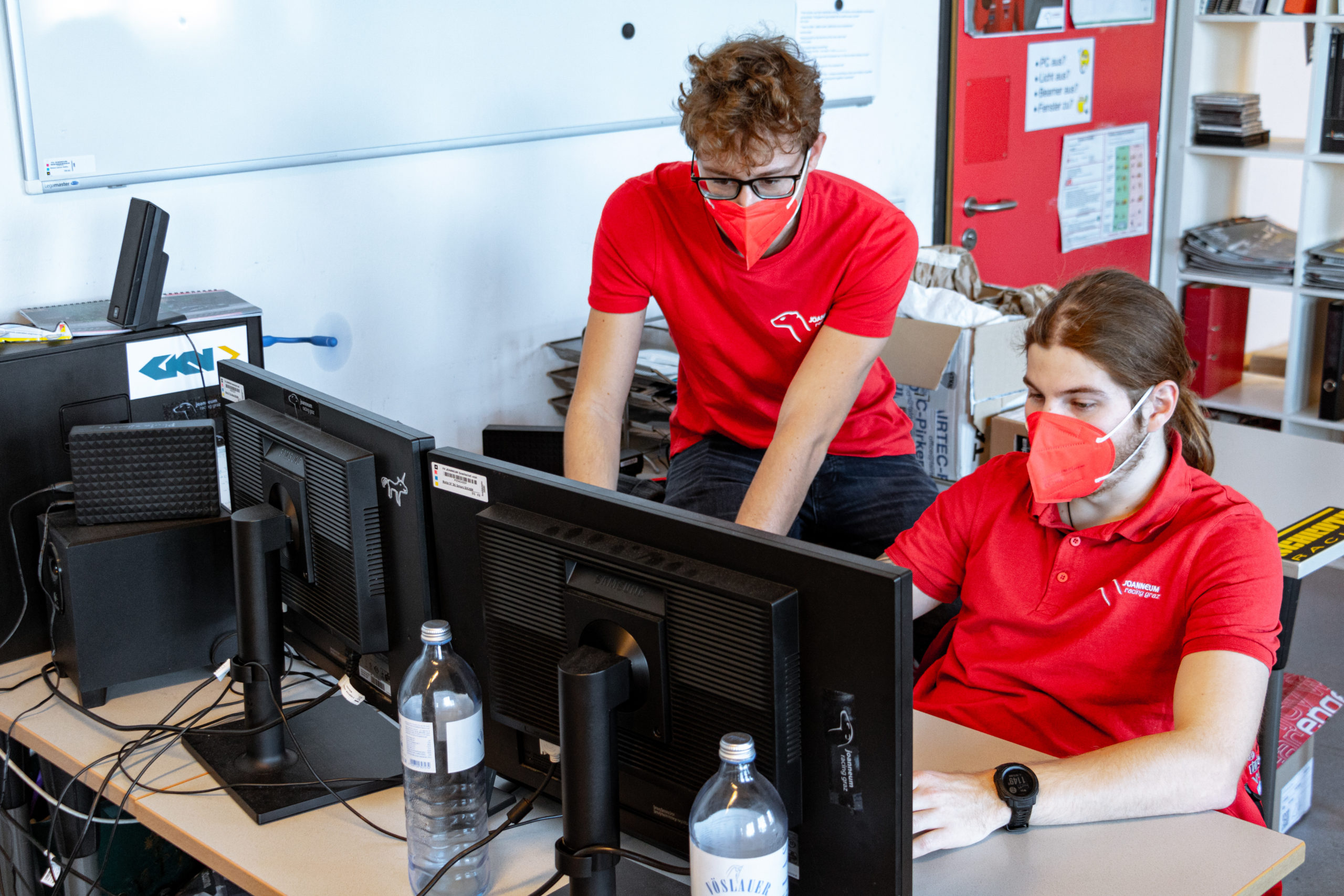 Welcome to our new blog entry. Today we introduce you to the new management of the racing team. The technical director Alexander Zopf and the organisational director Thomas Schmid talk about their tasks and the goals they have set themselves for the new season.

New engine, new car, new season: big changes are currently taking place behind the scenes at Joanneum Racing Graz. For this reason, the new team management can be found in the workshop or Race Control every spare minute. Automotive Engineering student Alexander Zopf is in charge of the technical management of the JR22 and Thomas Schmid, who studies Engineering & Production Management, is in charge of the organisational management. Together with Financial Director Wolfgang Schneider, the two are at the helm of the racing team and ensure that the processes run smoothly.

“It is definitely a big challenge, but I am definitely positive about it,” says Alexander about his new task at Joanneum Racing Graz. Last season, the 23-year-old was Secretary to the Board and worked in the E-Powertrain department. He finalised the gearbox housing and designed the motor housing. Now he is responsible for the entire new car, the JR22: “I take care of everything to do with the JR22, so I do the project management.” In addition to scheduling and meeting deadlines, he ensures that communication between the nine technical departments functions properly. Making technical decisions is also Alexander’s responsibility: “For example, if there are two solutions for how to screw on the battery, it’s up to me to choose the one that makes more technical sense.”

The Bachelor student has been part of Joanneum Racing Graz since 2020, after being asked by fellow students if he would like to join. Alexander is still enthusiastic about the cohesion of the Weasels: “That’s why it’s important to me that the team members meet and coordinate more at the FH again, but of course only if the current Corona rules allow it.” The Salzburg native sees open communication as the key to a successful season. When asked about the goals for the competition season, he remains realistic about the change of drive: “First and foremost, the car should drive, of course. It’s also important to me that we build a racing car that complies with the rules and passes the technical inspections.” Personal development, in order to be better equipped for later management positions, is also in focus for him. “You are part of Formula Student to learn something for life. It’s not just about winning, even though successes are of course a very nice thing,” says Alexander, who also wants to convey this spirit to the other Weasels.

The organisational part of the team management is taken over by Thomas, a Master’s student: “Due to my dual studies, I was involved with batteries. When it became known that Joanneum Racing Graz was switching to electric, I applied for the Battery Department. This department was newly created at the time due to the change in drive.” That was in the summer of 2020. Now he has switched to the management side of the racing team as organisational director. The decision was not easy for him: “It is both a challenge and a great honour.” His area of responsibility is clearly demarcated from that of Alexander. “I represent the team externally and take care of the distribution of tasks within the organisational departments as well as a smooth process during the competitions,” Thomas explains. Together with the technical manager, the 24-year-old also works out the deadlines for the production and testing of the JR22. He experiences the first weeks in his new position as interesting, but also still somewhat unfamiliar. “I now see the team from a completely different perspective,” says Thomas.

For the Viennese, the team spirit is also paramount: “The cohesion of the Weasels is strong, we are more than just a team. Many friendships develop in the team.” Currently Joanneum Racing Graz has 80 members, which requires an enormous amount of coordination. This is where Thomas wants to start: “I want to improve the delegation of tasks and keep the motivation in the team high.” It’s no coincidence that his personal goal for the next year is to improve his leadership and management skills. But Thomas has also set himself sporting goals. “We want to have a successful season and of course bring as many points and trophies to Eggenberg as possible. But in the end, the most important thing is that the team is satisfied with the car, has developed further and has grown together,” he affirms. Alexander and Thomas are looking forward to the upcoming challenges and want to contribute together to continue the success story of Joanneum Racing Graz in the electric class.