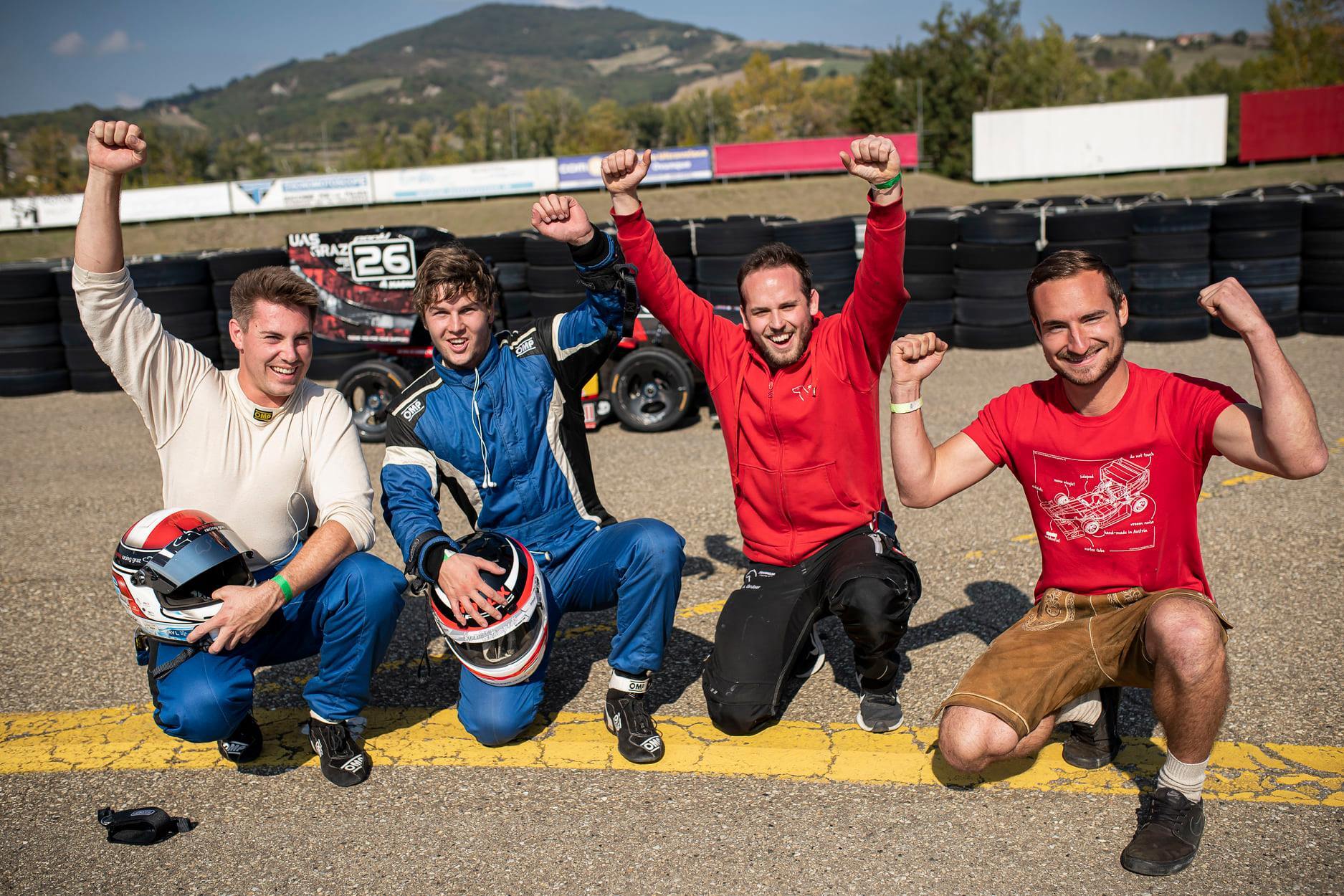 Pit stop at joanneum racing graz 3.0: A victory at the end of an era

Welcome back to our blog series. This year’s season came to a brilliant end at Formula Student Italy this autumn. The Weasels celebrated their second overall victory. The coming season will bring big changes: The combustion engine is history and team leader Sushama Chander ends her active time in the team.

The Netherlands, Austria, Hungary and now Italy: The well-filled season calendar of joanneum racing graz took the Weasels right across Europe. Postponed to autumn due to the pandemic, the competition in Italy marked the season finale. Strengthened by their previous successes, the team started into the static and dynamic events. The static competitions took place online from 27 to 29 September. The participating Weasels gave the team a whole set of medals. First place in the business plan event was cause for jubilation, along with second place in engineering design and third place in cost report. The dynamic events followed two weeks later.

“In contrast to the first competition, we went into the last one a bit more relaxed”, describes Felix Stocker the preparation for the dynamic events. He was one of eight Weasels who took part from 11 to 13 October at the Autodromo Varano. Julian Sachslehner was also there: “We did two more days of testing before we left. The jr21 was already perfectly prepared from the last competition in Hungary. We only fixed the problem of the broken drive shaft, which had occurred in the Endurance at the Hungaroring.” With the experience of three races, the processes at joanneum racing graz worked like clockwork – starting with the eight-hour journey, the pit set-up and the technical inspections. Julian agrees: “You grow together as a team and accordingly we are very well attuned to each other. Nevertheless, it was of course a pity that only so few people were allowed to be there.”

A packed programme awaited the participating teams on the second day. Three events had to be completed. Skidpad and Acceleration were the first ones. “In Skidpad, many teams were very close to each other. We came fifth,” Felix says. Acceleration was a little more difficult, as Julian reports: “Due to the rather poor grip conditions, we struggled with acceleration and finished tenth.” In the final autocross, it was important to find the right time to start: “We waited a little longer so that the grip conditions would improve. But we couldn’t start too late either, otherwise the temperatures would have dropped too much. It was already relatively cool, which made it difficult to bring the tyres up to temperature.” However, joanneum racing graz also mastered this challenge and took the first podium place in the dynamics with a third place.

Decision on the last race day

On the last day, traditionally, the Endurance competition took place, in which the most points are awarded. Good preparation is therefore essential, so various technical checks were carried out the day before and the driver change was simulated. “Endurance was exciting. We didn’t know exactly where we stood because many teams presented themselves strongly in the other competitions,” said Felix. However, the jr21 and the drivers were in top form in the competition and secured the first places in Endurance and Efficiency. This meant that joanneum racing graz could not be denied its second overall victory of the season. The crew on site celebrated the last success in the combustion class as well as the rest of the team at home in Graz. They are already working hard on the new car, the jr22. In the coming season, a big challenge awaits the Weasels with the switch to the electric motor.

Farewell to the team leader

However, the change of drive is not the only one. Team leader Sushama Chander is handing over her duties at the beginning of November to concentrate on her Master’s thesis and new challenges. “The season was extremely exhausting, but in the end every second in the workshop and in Race Control paid off. This is also reflected in our performance”, Sushama looks back proudly on the last few months. Even the sudden changes brought about by the pandemic didn’t stop the Weasels: “At the competitions, every move was spot on, everyone knew what to do.” For the last two years, Sushama has been the head of joanneum racing graz. “I have learned to see criticism as feedback, to implement it as well as possible and thus to develop a better team dynamic. My appearance has also become much more self-confident,” she sums up. Who will take over the management of joanneum racing graz in the upcoming season will be revealed in the next pit stop.