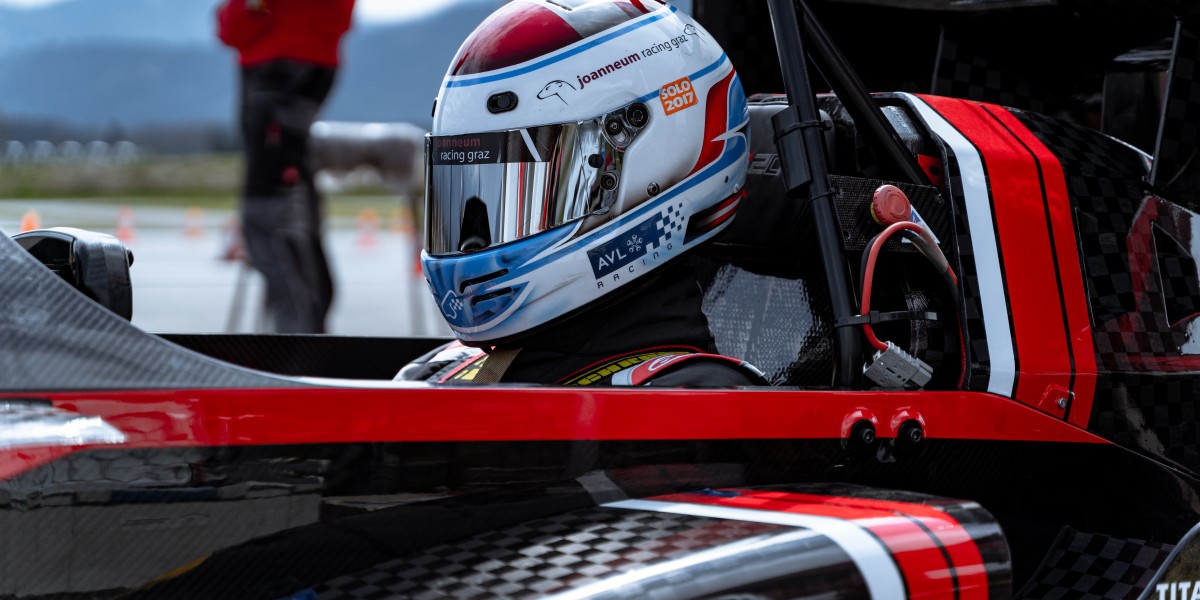 Welcome to the next part of our series of articles. As the first Formula Student competitions are scheduled for July, we are in the final testing phase of the jr21. Markus Wieser, Eva Rechberger and Patrick Jenni tell us why intensive testing is the key to a successful season.

“During testing, we push the car to the limit to find out what’s wrong,” says Markus Wieser, Team Leader of the Testing & DAQ Department, summing up the goal of the testing phase. Since last autumn, the drivers of joanneum racing graz have been reeling off test kilometre after test kilometre with the jr21, mostly at the Fohnsdorf driving technique centre or at Center West in Graz. Members of the Suspension, Aerodynamics, Electrics and Engine Departments as well as the Technical Director are always present. In addition, there are other Weasels from various departments who act as track marshals. Markus, who is in his 6th semester of “Fahrzeugtechnik / Automotive Engineering“, is responsible for personnel management and is in charge of planning the test days: “I take over the coordination between the assemblies and create the test plan, which specifies when and what is tested.” This year, 30 test days were originally scheduled. “But in the end there will be 40,” says Markus.

The preparation for a test day already starts the night before. The engine is installed in the car, the necessary tools are packed. During the final test drive in front of the workshop, the team members check whether the car works as desired. Afterwards, there are a few hours of sleep before the team meets again around six in the morning and sets off together to the test track.

Once there, the Weasels split up to set up the pit and get the track ready for racing. The assembly managers check the car one last time. “Then the driver starts warming up the car and the first session can start,” says Eva Rechberger, team member of the Powertrain assembly group.

“We take the car to the limit.” – Markus Wieser

The search for the perfect set-up

For six months, 21-year-old Eva Rechberger has been part of joanneum racing graz and goes along to the test track: “While the car is running, I’m a track marshal and set up the cones again. Otherwise I refill the compressed air or petrol and change the battery if necessary.” Spare parts brought along ensure that the car can be repaired on site if necessary. As a team member of Suspension, Patrick Jenni is also involved on test days: “Each assembly plans the tests that are relevant for them. For example, we test different set-ups. These are in fact specially tuned for the individual disciplines such as skid pad and endurance.” Tyres and springs are also subjected to extensive testing.

During the test days, team spirit is just as much in demand as in the workshop. “It’s extremely important during testing to work as a team and not let yourself get rattled,” stresses Patrick. Markus agrees: “There are always test days when not much progress is made because the car doesn’t work as desired. But that’s also the attraction of it. As engineers, we are constantly finding, solving and understanding problems.”

During the sessions, various sensors collect different data. The data obtained plays an important role, as Eva explains: “It’s a matter of reading out what can be done better and changed.” A lot is analysed right on the track and in consultation with the driver. Back in the workshop, the team members examine the data from the individual sensors in more detail. “We document everything we have achieved and then see with which damper setting or which tyre pressure we have set the better times,” says Patrick.

According to Markus, the data collected is not only significant for this year’s car, but also for the development of the next one: “We can already determine here where there is potential for improvement for the following season.” In addition, the rough simulations for the next car will be better with the help of a large amount of data already available.

The three Weasels agree that the test days are challenging. However, the joy of seeing the jr21 in action after months of work in the workshop and looking for ways to improve it prevails. “The exciting thing about testing is definitely watching the car develop,” says Eva. Patrick adds, “If you’ve got half a second out of it at the end of the day, that’s great progress.” And Markus notes, “If the car outshines those of the others in the competitions and runs well, the testing has more than paid off.”

“The exciting thing about testing is watching the car develop.” – Eva Rechberger