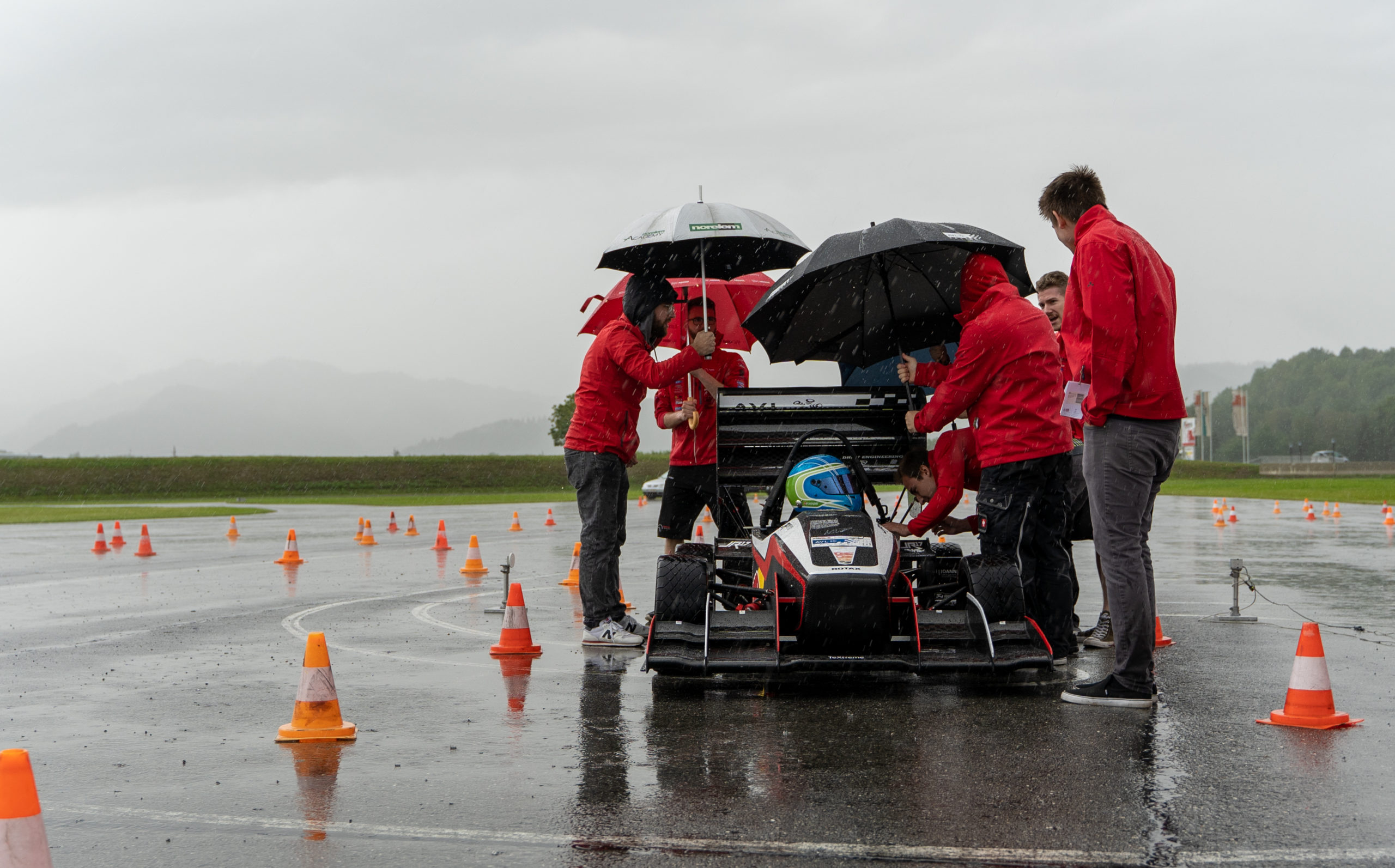 Since the summer holidays, a lot has happened at the FH JOANNEUM racing team. What the team was working on and what challenges they had to overcome, you can find out in this article.

Uncertainty has long ruled events at joanneum racing graz. After the COVID-19-related lockdown, work on the car came to a virtual standstill for a few weeks. The summer competitions – which are the highlight of the Formula Student season every year – were soon cancelled without replacement. “Since mid-June we have been working on the car again”, team leader Sushama Chander explains. “Although only a limited number of Weasels were allowed to enter the workshop, we can look back on very successful weeks”. The manufacturing phase on the  jr21 – as the bolide, which is now just about to chase the podium places in summer 2021, was immediately renamed – has now been completed. Just in time for the start of the winter semester, on 12th of September, the latest gem from the FH JOANNEUM racing team made its maiden voyage.

The current focus is on testing the car, as Sushama explains. “Of course not everything works perfectly at the first shakedown. The engine, transmission and electrics always have to be tested and adjusted intensively, and the drivers also have to get to know the car properly before they can ride it really fast in the competitions,” explains the Salzburg-born team leader. The changed schedule for the 2020/21 season is not a disadvantage; for the first time the team has almost three quarters of a year of testing time at its disposal. This first test phase is scheduled to last until mid-November, before the weather conditions make a winter break indispensable. In mid-March, the team will enter a second test phase in which the final adjustments will be made to the jr21.

However, a real winter break at joanneum racing graz can only be seen in terms of testing. At the same time as the shakedown of the jr21, the team was already constructing the new e-bolide, which will compete for the coveted podium places in summer 2022. “Despite the early start of the construction work, we have set ourselves a very tight schedule,” explains Sushama. According to the team leader, it is planned to start manufacturing the next car in the second test phase of jr21 in order to ensure a similarly long test phase for the team’s first e-bolide. “Electric drive technology is largely uncharted territory for us, and we have a lot of catching up to do here,” says Sushama.

Nevertheless, the team has set itself high goals for the competition season with the jr22. “We want to be the best Austrian team, of course the technical inspection of the car should not be a problem. In addition, we want to run several endurance run simulations before the competitions to be prepared for the races in the best possible way,” Sushama explains. Meanwhile, the targets are even higher for the last season, in which a combustion engine powered bolide from joanneum racing graz will participate in the competitions. In addition to a place among the top three in the world ranking list, all races in which the racing team starts are also to be won, as the team leader reveals. In addition, the disciplines Autocross and Endurance are to be completed one second faster per lap than jr19.

“Never lose sight of the goals”

Assuming, of course, that the competitions can also take place in the summer of 2021. “We are 100% planning on being able to participate in competitions again next summer. We see our home competition at the Spielberg and also the race in Germany as fixed dates, in which other competitions we can participate additionally, cannot be said at this time yet”, explains Sushama. This is the last major uncertainties that joanneum racing graz is facing after the return to the workshop was so successful. For Sushama a clear thing: “Even in this difficult phase we have worked together excellently, never losing sight of our motto and goal – never stop pushing.