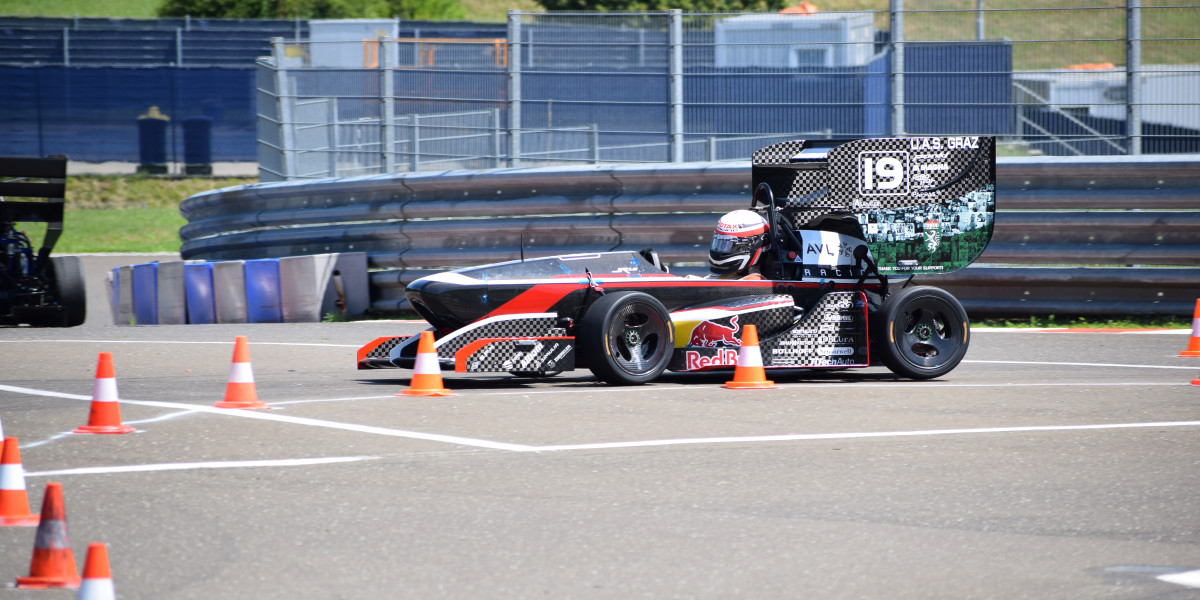 Welcome to the next part of our series of articles about joanneum racing graz. For this issue we have brought three more weasels in front of the curtain, who are part of the FH JOANNEUM racing team with enthusiasm and commitment. This time Katharina Plohovich, Stefan Geyer and Petra Hasler share their experiences.

Katharina Plohovich fulfills a dual role at joanneum racing graz: she is not only a substitute driver, but also a team member of the Aero/Chassis Department. “For me, it was clear from the beginning that I wanted to be part of the team. In the driver selection process, I made it to the next elimination round in my first semester at FH JOANNEUM / U.A.S. Graz” the 20-year-old says. Since then, Katharina, who is now in her fourth semester studying “Fahrzeugtechnik / Automotive Engineering” has been a substitute driver: “Unfortunately, I’m a bit too small for the car.” In her second semester, she decided to join the Aero/Chassis Department as well: “In the beginning, it was hard for me to get into the team. Now I’m additionally part of an assembly group and thus get to experience much more of team life.”
﻿

“In our department we further develop the aerodynamics of the car,” the Lower Austrian tells about her area of responsibility. To do this, she draws and simulates components on the computer and finally analyzes how the air flows around the car. The goal is clear: “We want to generate as much downforce as possible to improve grip. This then allows the driver to go faster.” On the jr21, Katharina and her team members also tried to exploit the aero’s full potential for improvement. She can also imagine changing departments within the team at a later date: “Suspension would interest me. In doing so, I could also apply the study content from the field of vehicle dynamics.”

Due to the Corona location, Katharina no longer comes to the workshop as regularly; a lot happens in the home office. “The team spirit suffers a bit under Corona. But when normality returns, I’m sure everything will be like before,” the student is convinced. The exchange of knowledge with other students is particularly important to her and makes it possible for her to learn new things outside of her studies. Thanks to her work at joanneum racing graz, Katharina is one step closer to her big dream: “I want to develop cars for a racing series. Motorsport fascinates me, because it’s possible to push the limits and constantly improve the car, trying out completely new things.”

“My department is a one-man show,” says Stefan Geyer, team leader and sole member of the Manufacturing Department. The 25-year-old became a member of joanneum racing graz in December 2019 after teammates approached him looking for a Manufacturing member. “I especially like the independent learning. The team also gives me a lot,” Stefan is enthusiastic about his experience so far. He is responsible for raw material procurement as well as supply chain management, and is involved in determining designs for components. For example, 3D printed parts have to be specified as such from the outset. “I am also responsible for finding sponsors for raw materials and components,” says Stefan.

Stefan Geyer is in charge of the Manufacturing Department.
The Lower Austrian is studying “Fahrzeugtechnik / Automotive Engineering” in the sixth semester and can put various study contents directly into practice: “In particular, I need knowledge from the areas of materials technology, design theory as well as quality and supplier management.” Stefan also sees advantages for his professional future in working with the Racing Team. “I’ve learned what needs to be taken into account in the design and production of a race car.” For him, it’s also all about getting the maximum out of it. “I want to push it to the top. The last few percentages are much more effort than the first 70 “, says the student, summing up his passion for motorsport.

He also sees personal development away from the practical level, especially in the area of self-organization:

“I learned to be persistent when necessary.” In addition, Stefan was able to make contacts and thus build up a network. In addition to Sponsor’s Day, there is another highlight for Stefan: “Working with our manufacturing companies is always a great experience for me, especially when we pick up the components there.” He also enjoys the team-building workshops: “It makes the team even more cohesive.”

Petra Hasler has been strengthening the Business & Cost Department since December 2020. “There was such a rush in our program that an internal application process was necessary to become part of the team,” says the 22-year-old, who is studying “Management of International Business Processes” in her second semester. Together with her department colleagues, she is fine-tuning the business plan for the Formula Student competition. After brainstorming together, the work packages were divided up: “I’m particularly concerned with the topics of company, management, product and service.” The rough version is already finished, at the moment the logo is being worked on together with the design team and the executive summary is being written.
﻿

“The planning of the business plan can certainly be compared to the course of a project in later professional life”, Petra describes the intensive last months. The team had to start from scratch: “At the beginning we were thrown in at the deep end, we had little theoretical knowledge in the first semester. But the content of the second semester in particular can be put into practice very well.” In addition to gaining practical experience, Petra can also earn ECTS credits for her work.

“Everyone gives their best” – Petra Hasler

She got to know most of her team members via the Internet: “Sometimes the work is a bit tedious because of Corona, but the team-internal motivation is high. Everyone gives their best.” Petra has learned to take both personal responsibility and responsibility for the entire team. “Everything I do has an impact on a big whole,” says Petra, who is already looking forward with anticipation to the competitions in the summer months. “Since I grew up near the Red Bull Ring, motorsport has accompanied me virtually my entire life,” says the Murtal native about her enjoyment of the sport. joanneum racing graz will also be returning to Spielberg in July as part of Formula Student Austria.