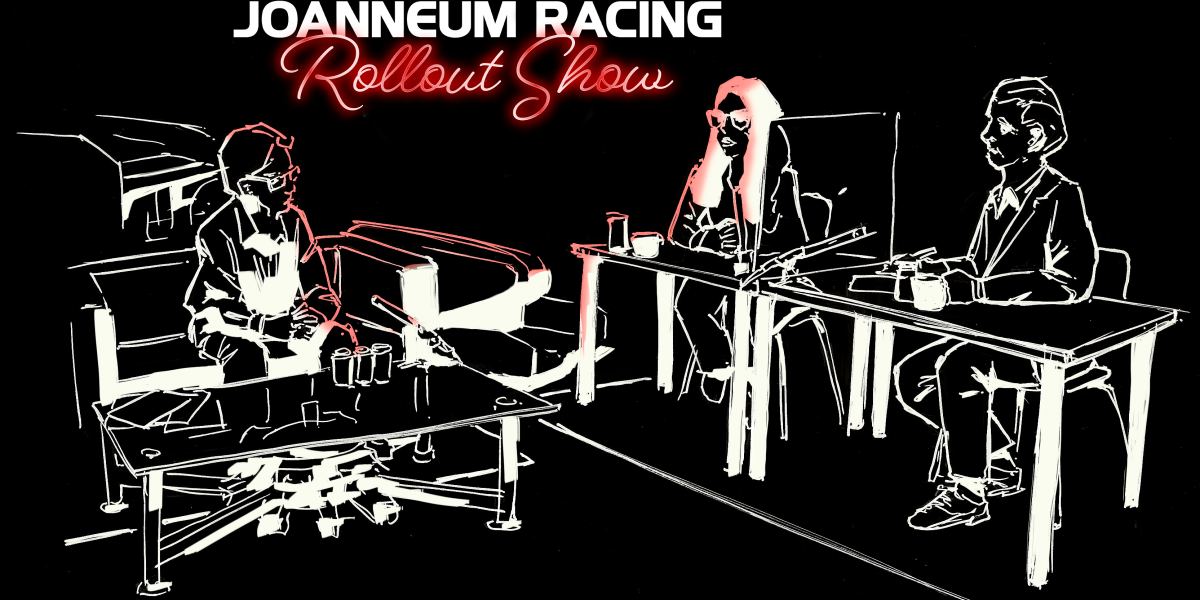 Welcome to a new part of our blog series. The Formula Student season is fast approaching. But before we hit the race track, the Rollout of this year’s racing car will take place on May 28th. Oliver Klughardt and Maximilian Bankhamer give an behind-the-scenes insight into the digital event.

“A lot of people put their heart and soul into it.” This is how Oliver Klughardt sums up the months of preparation for 28/05/2021. This year, the Rollout of jr21 presents itself in an unprecedented form. Instead of a packed auditorium, it can be followed in comfort and in line with the COVID-19 regulations at home on the couch from 7 p.m. on the joanneum racing graz YouTube channel. Afterwards, there will be an opportunity to ask the team leaders questions in a Q&A session. The Rollout Show will be moderated by Oliver Zeisberger, starting at 7 p.m. . Reinhard Sampl, a rally driver and racing instructor, could be won for the tech talk.

>Take part in the rollout here!<

Intensive months
Since last November, the departments Design, PR, IT and Organisation have been working on the concept for the rollout. “At first, there was talk of holding a hybrid event. But due to the bad outlook, we decided before Christmas to move the entire rollout to the internet,” says Maximilian Bankhamer, who, like Oliver, works in the Design Department. Then the rollout team designed three different concepts. Using internal pro and con lists, these ideas were weighed up to filter out those with the greatest entertainment value for guests and sponsors. “If there is a digital event this year, then we have to see it as an opportunity to create something that we could never have done otherwise,” says Oliver, who is the team leader of the design department. Finally, the decision was made: the rollout of jr21 should be a late-night show with hosts and guests.

Brainstorming began in mid-January and with it the writing of the script. Various contributions such as a retrospective of the 18-year team history, which were filmed at different locations, also had to be conceived. “For the filming, we sent a very long list of required equipment to the media centre of the U.A.S. Graz,” Maximilian explains the planning for the elaborate filming. This took place at the test site in Fohnsdorf, the HTP factory building in Fohnsdorf and a park in Graz, among other places. Technical team members who were present in the workshop or during testing also helped with the filming.

Teamwork makes everything possible
According to 21-year-old Oliver, the planning has been completely different from those of previous years: “The effort for this year’s rollout is greater than ever before. In addition, the entire preparation is done through team meetings.” Maximilian adds: “In the past, the design department was not as involved in the rollout. However, due to the filming, that has changed.” While they both co-wrote the script, Maximilian was also heavily involved in the organisation. “Maximilian was our lynchpin because, unlike many others, he was directly in Graz,” Oliver highlights his colleague.

The effort for this year’s rollout is greater than ever before.
– Oliver Klughardt

Both emphasise the excellent work with all departments. Across large geographical distances, they managed to pull together and integrate new team members into the team. “We can always rely on each other,” says Oliver, confirming the great team spirit at joanneum racing graz. The biggest challenge is to keep track of everything, as Maximilian reports: “We have a gigantic Excel spreadsheet in which all the people needed as well as the equipment and props are listed.” For the 24-year-old, however, it’s nice to see how everything eventually comes back together as one. “We made so many individual snippets for the different contributions. And then you see the whole feature and you think to yourself: ‘This is insane’,” Oliver agrees.

An exclusive event awaits the viewers of the rollout, as Oliver emphasises: “It will only be shown once in this form.” The final result should be very different from the rollouts of the last few years. “The rollout show demonstrates how multi-faceted joanneum racing graz is. The event will also be a bit more relaxed and casual than usual. The humour will definitely not be neglected,” Maximilian gives a foretaste. A new approach, intended for a broad audience, will ensure good entertainment.

The entire joanneum racing graz team is looking forward to presenting the race car for this year’s season to the public and celebrating the rollout together with students, sponsors, family and motorsport fans.