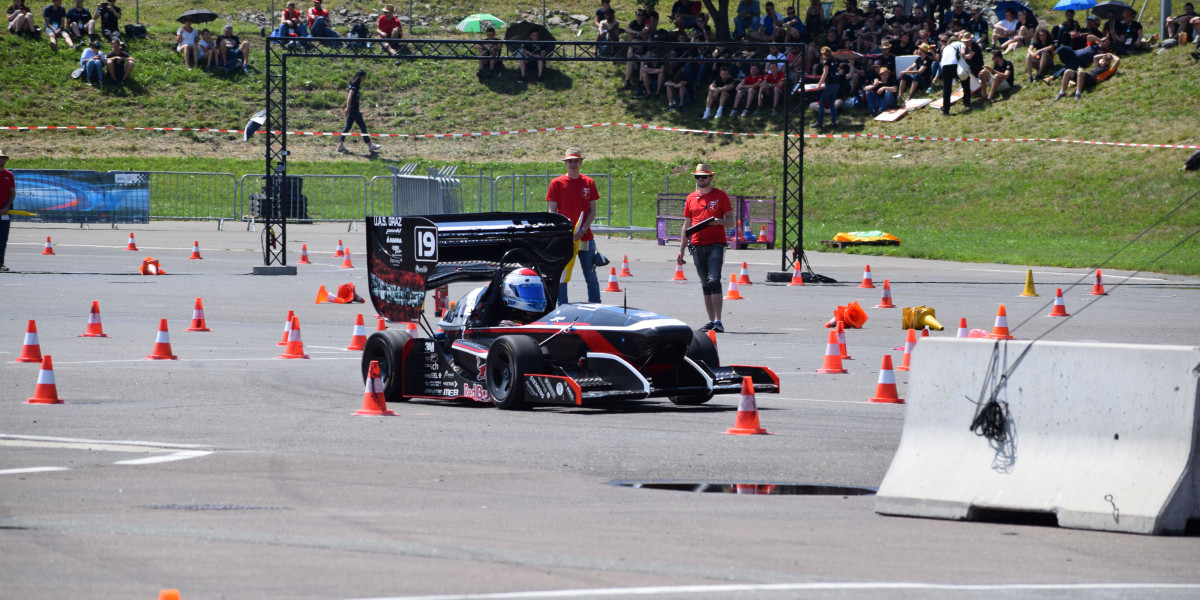 Pit stop 2.0: A look behind the scenes

When Fabian Krähan stepped into the workshop for the first time last summer, the situation for joanneum racing graz was anything but easy. COVID-19 had led to the cancellation of the competitions in the summer, and jrg’s schedule was also thrown into disarray due to the weeks-long lockdown in the spring. “Back then, every hand was really needed urgently, which is why a fellow student asked me and some of my fellow students if we could help out a bit in the workshop,” Fabian recalls. For the Lower Austrian by choice, it was already clear early on that he wanted to be part of joanneum racing graz one day. “But I didn’t really expect it to happen so early on,” explains the third-semester automotive engineering student.

“Enormous number of areas in which you can benefit.” – Fabian Krähan

At first, Fabian was worried whether he lacked the theoretical knowledge to really make an active contribution to the team. Worries that were soon to turn out to be completely unjustified. “Actually, it was good to have a year in which you can get used to the processes in the team. I got involved with grinding the chassis in the manufacturing phase, then quite soon took over the coordination of this work package,” recalls the 23-year-old. Then came the design phase – and a new challenge for Fabian: “It was time to take on responsibility. During the design phase, I was in charge of the brake design and brake calculation – a task that we successfully completed a few days ago,” says Fabian. “That was already very exciting, we designed and developed the brake calipers ourselves – and I took a leading role in the process.”

It is one of many experiences that Fabian no longer wants to miss after only a short time as part of the team. “You learn an incredible amount here for your professional life. From supplementing the theoretical basic knowledge from your studies with practical application to the ability to work in a team to experience in leading highly technical discussions – there are simply an enormous number of areas in which you can benefit at joanneum racing graz,” explains the HTL graduate. But Fabian particularly emphasises the team spirit, even though COVID-19 dampened the team spirit a little. “Of course, it wasn’t that easy to get a foothold in the team while adhering to the restrictions. But we quickly tried to map teambuilding activities online, which I think we managed quite well.” Fabian considers the online design weekends, in which the progress of the car was “visible” every week by means of a digital mock-up, to have been particularly successful. “That was a great motivational boost every time, to see the progress of all the assemblies every week.”

Experience for the future

Also part of the team since summer 2020 is Alexander Zopf. For the Bachelor’s student, it was clear for a long time that his educational path would lead him to the joanneum racing graz at some point. “We once had a guest lecture at the FH in the HTL, which impressed me very much, which is why it was clear to me quite quickly that I would like to study at this UAS. I also talked to a member of the racing team there, which also interested me a lot,” recalls the HTL graduate. The fact that he then became part of the team so quickly is also due to the persuasion of his year spokesperson: “Just like Fabian, I was also persuaded to join the team by a fellow student in the summer,” says Alexander.

A decision that Alexander does not regret at all today: “At the Racing Team, you can learn so much for the future; there is nothing comparable to the UAS in the field of automotive engineering where you can gain so much experience,” the 23-year-old is convinced. From the adequate preparation of drawings to the use of CAD programmes to contact with external manufacturers – the experiences, which are also quite valuable for professional life, are numerous, according to Alexander. Yet the Salzburg native actually has a different fascination than classic automotive engineering: “My great passion is actually motorcycling, but my second fascination is alternative drive methods, which is why joining the E-Powertrain assembly group was quite fitting,” Alexander recalls.

“There we worked almost day and night.” – Alexander Zopf

After just a few months on the team, the automotive engineering student was able to develop enormously in this area. “I had already had my first contact with CFD simulations at HTL through my diploma thesis, but my knowledge was now raised to a completely new level. I was also able to learn an enormous amount at joanneum racing graz in the areas of transmission construction and cooling design,” recalls Alexander, who, in addition to his work in the E-Powertrain assembly group as Secretary to the Board, also has organisational responsibilities. “Originally, the organisational side of things didn’t really appeal to me, but I think I’ve grown with the task and have now been able to gain some important experience,” says the Salzburg native, taking stock. A balance that is also quite positive in terms of team spirit. “The team spirit was particularly noticeable before and on Sponsors’ Day. In the weeks leading up to it, we worked almost day and night to make sure everything ran smoothly, and on the day itself – after everything didn’t go quite right in the morning – we demonstrated our team spirit. Then everyone really lent a hand, which was really good.”

The youngest member of the team is Journalism and Public Relations (PR) student Martin Pfandl. Although the 22-year-old has only been part of joanneum racing graz since November, he has already been able to gain some valuable experience. “In the racing team, you learn to take responsibility right from the start. I’m currently in charge of the team’s Instagram channel, and I’m also working with many other members on the script for the video that will be presented at the roll-out,” explains Martin, for whom it’s clear: “There’s no such thing as too much practical experience – every insight is valuable.” There are plenty of those at the student motorsport club, and in the future the student would like to try out other channels, or also try his hand at texting more for the newsletter or the website. “The possibilities in the team are wide-ranging,” Martin is convinced.

Martin is from Zeltweg and has a rather unique career behind him, as he decided to go in a completely different direction after graduating from HTL with a “Journalism and Public Relations (PR)” degree. “At that time I found it a bit too technical, but now as part of the racing team with my parallel studies I have found a very good mixture. Here I can combine my strengths perfectly,” Martin explains. And the student can also bring these to bear in the team, as the 22-year-old emphasises: “In the team, you have the opportunity to live your own life, to add your personal touch to different areas – that’s quite unique.” In concrete terms, the Styrian wants to report closer to the action in the future, for example, he wants to bring the feeling from the workshop to the screens of the followers of joanneum racing graz with stories. Because the following is large – more than 8,000 people already follow the team account on Instagram.

In addition to the opportunities for development, it is particularly the coordination skills that Martin has been able to put into practice in his first months at joanneum racing graz. From time management to coordinating script writing – a large team – like the racing team of the FH JOANNEUM is – needs to be well organised. Meanwhile, this good organisation also contributes to the formation of a team spirit, which Martin has already been able to experience intensively despite the COVID-19-related restrictions. “We have online meetings, we have virtual team-building workshops – that compensates at least in part for the lack of face-to-face contact,” the student is convinced. “And at the same time, it increases the anticipation of finally being able to work together as a team on site.”