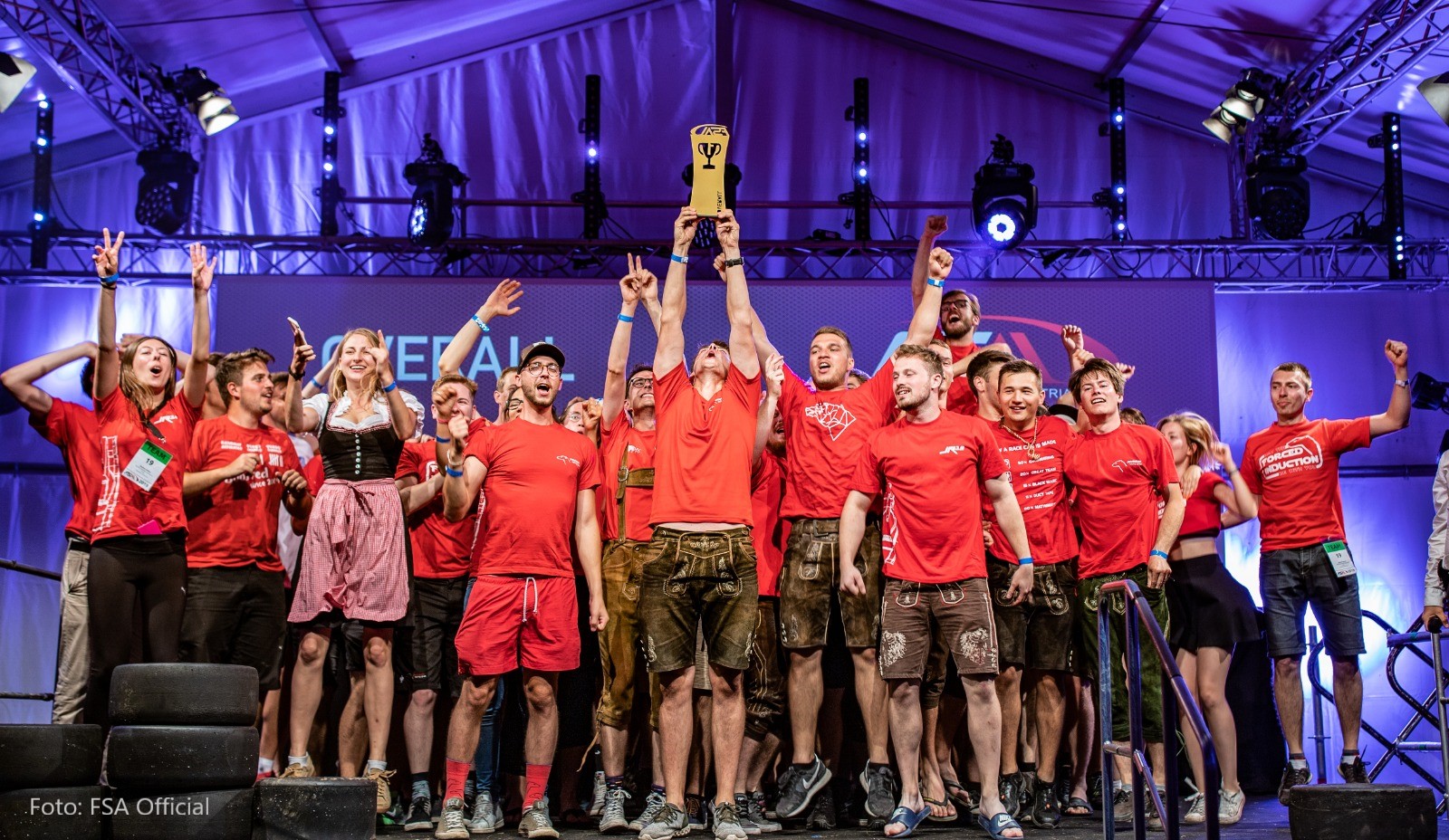 The 2019 season was full of highlights. In the end we can be proud of two overall victories and the maiden voyage of our electric car. With the following milestones we want to review this year.

Handover of the team

Every year with the Sponsors Day takes the official team handover place. Mostly trained in the teams of the previous year and sometimes even the year before, new “Weasels” were now ready to pull the strings at joanneum racing graz. The jr18-team retired from active team business in November 2018, but did not leave the team completely. They were always available to the new team with help and advice and worked on the common goal: To make the next car even better than the old one!

In the center of the design of our jr19 was the new monocoque, which was already completely designed in October 2018. The exterior paint design should be one thing above all this year: Weight-saving. But the use of the corporate identity of joanneum racing graz was also a central point in the creation of the design. All in all, the design of the jr19 is tidy and consistent in curvature. In consultation with the aerodynamics department, the endplates of the front wing were also dynamically shaped and, like the entire bolide, are an eye-catcher.

On April 12th the time had finally come: After the exhausting production phase we were allowed to present our finished jr19 for this year’s season. Friends, relatives and sponsors had come to admire the latest car of joanneum racing graz. The now traditional clubbing in the Audimax of FH JOANNEUM was a successful finale to a great event. Now the eagerly awaited test phase could begin, during which we fine-tuned and improved this racing car and prepared it for the event phase.

First ride of the jre

This year eight students within joanneum racing graz dared to take on a completely new challenge. Namely the construction of a fully electric racing car, with which we laid the foundation for electric mobility in our team. Thanks to the active support of many competent partners and the know-how of our “Weasels”, we succeeded in reaching an absolute milestone on May 14th, 2019: The maiden voyage of the jre. After the initial exciting phase, this bolide will be thoroughly tested and continuously optimized.

After we presented our jr19 at our RollOut in March, we took it to the test tracks for the first time. The many hours our team invested in the jr19 allowed us to start testing at a high level. During our rides at the test grounds in Fohnsdorf and Kalsdorf we constantly identified new problems, in order to fix them afterwards and make our bolide more competitive, so that we were optimally prepared for the three upcoming competitions.

Our first competition last summer took us to Zalaegerszeg, Hungary. We worked hard to keep the jr19 under 200kg, which turned out to be difficult but realistic. And we were allowed to cheer: 192,4 kg! The weight was far below our target. But that was not our only reason to be happy. We made it into the “Top 3” in five disciplines. At the end of the day we took the overall victory with 869.2 points – an incredible first competition this season.

The annual home game at the RedBull-Ring in Spielberg was on the agenda and after our overall victory in Hungary we wanted to show our potential “at home”. Through some additional applications on the car we were again worried about the 200kg mark, which we fortunately were below again. Top placings like the first place in Endurance, second place in Engineering Design and third place in Skidpad helped us to the long awaited home victory, which we of course celebrated classically in Lederhosen and Dirndl.

Could we manage a third overall victory in a row? We stayed on the ground and concentrated on the last and toughest competition of the season at the Hockenheimring. Due to the very strong competition in Germany every move had to fit perfectly. This was evident in the cost and design presentations, because we made it to the final both times. The third overall victory became more tangible, but we didn’t have it in our pocket yet. On the last day of the competition, we got disqualified after the Endurance Run due to technical problems – true to the motto: Things always seem to happen when you least expect them. Nevertheless, we are overwhelmed and grateful for all that our sponsors have made possible for us this season.